Transparency – Will give us confidence in our Council 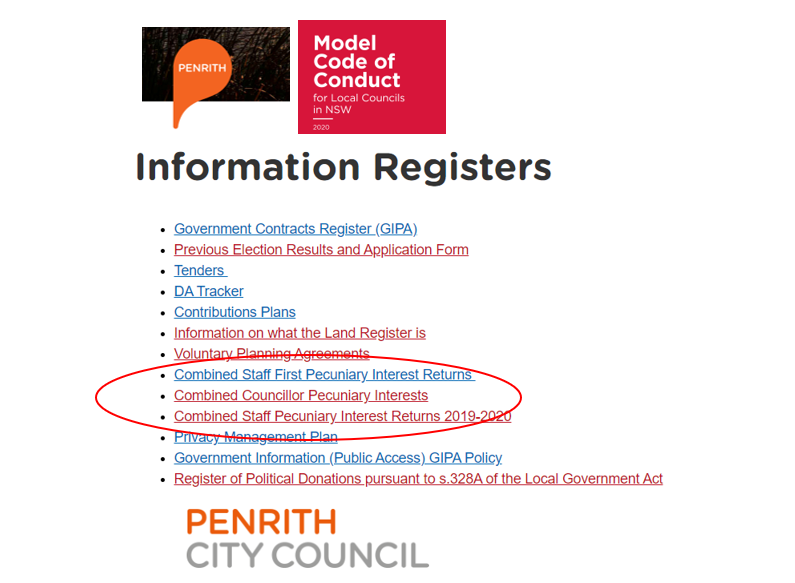 Declarations of interests and abstaining from voting should be on a public register, only then will we discover how often our interests are not considered!

Unless we have a fully transparent scheme, residents cannot make a judgement about it.

We should be asking, how many times in the past 12 months have Councillor’s declared an Interest or had to refrain from voting due to a conflict of interest?

Under Part 4 of the Local Government code of conduct – Pecuniary Interests:  Councillor’s only having to declare once a year if they had any interests.  The yearly returns are designed to promote openness and transparency in local government, and to avoid a conflict of interest on the part of Councillors and senior council staff who exercise decision-making functions.

If you look at the declarations for Penrith Council, most of the information supplied by the current Councillor’s have been redacted.

This begs the question, how can we have confidence in our Council, when the information that is supposed to show transparency is not available to be examined?

In fact, redacted returns were a concern raised by an ICAC investigator who claims that redacting disclosure forms was ‘as bad as not complying’. In the same article the Minister for Local Government has said that the lack of transparency was concerning.

Therefore, I believe matters in Part 4 of the Code of conduct should not be redacted

Secondly, If Councillors believe in transparency, they will agree to include matters that fall under Part 5 of the Code to be listed on a public register.

Code of Conduct – Part 5 relates to Non-Pecuniary and Conflict of interest matters.

Non-pecuniary interests meaning:  Relate to private or personal interests of a council official that do not amount to a pecuniary interest as defined in clause 4.1 of this code. These commonly arise out of family or personal relationships, or out of involvement in sporting, social, religious or other cultural groups and associations, and may include an interest of a financial nature.

Currently, Non-Pecuniary and conflict of Interests are recorded in meeting minutes, however, the total number of times and range of matters are not readily available. So, for us to see the big picture, they should be transferred to a register that highlights the date of the matter, the relevant Councillor and the reason (as per part 5) which resulted in the interest.

This is important, it would provide transparency, we would be able to see the number of time’s a Councillor has had to refrain from debate and voting due to a conflict of interest. Every time this happens, they are not representing the interests of the residents who voted for them.

Finally, to be fully transparent, all registers should be attached to the Councillor profile via the Council Websites.

Information about each Councillor under their profile must contain: