Both released their platforms, No real surprises!  They’re based around State Issues! which are obviously more important to the Candidates when you consider who they both work for. Also remember, both left this vital information from their bios..

Their priorities are clear, State issues!  Clearly, the major parties don’t care about local issues!  Really, it’s not surprising, it’s not like they can stand proud on their achievements in Penrith.

My priority this week has been  spending time talking to the small business owners on High Street, Everyone I spoke to are absolutely peeved off with Council. The complaints ranged from, inconsistent policies, lack of communication and currently, the severe lack of strategy to really improve businesses during the current construction zone. (or as it was explained to me,  making it more attractive to Investors so they can sell off to the council owned land for the city park). They all agreed, my policy around resolving parking issues would be a great benefit, and would support it whole heartily.

Another focus this week was the Western Sydney Airport.  concerned residents have been contacting me asking for my view on the Airport. As far as I’m aware it’s a done deal.. I’m definitely concerned about the no curfew though!  The main concern for me, is not the Passenger airlines, but the freight side. I’m concerned about the whole logistic hub, that may create a massive increase in heavy haulage trucks. This huge scale of increase will definitely impact the residential areas.

Remembering that this airport has been pouted to become a aerotropolis that will become a 24/7 Freight depot!

This airport is being advertised as the only curfew-free international airport in the Sydney Basin (I Ackeran, www.thedcn.com.au, Nov 2017).

Further reading and investigation definitely needed! if anyone can shed light on the topic, I’m happy to hear from you!

Remember on 12th May vote for a real chance for change!

Well, the Penrith By-Election on May 12th is shaping up to be full of the same old major party spin!

Seriously, both parties are so far out of touch it’s almost laughable. No actually, it is laughable.

In fact today, whilst door knocking and speaking to residents, the overwhelming comment was, “They’re as bad as each other”. Most locals told me that, both parties are full of utterly self-assured cookie cutter personality types. Overwhelmingly, all those I spoke too are sick of both parties.

As I told them, “This is your chance to stop the Major Parties doing anymore damage to Penrith”.

Our future depends on you saying enough is enough. This is your real chance to change!

Please don’t vote for the cookie cutter party followers, your vote does matter. We need to focus on local issues, not party political agendas of State and Federal Politicians.

We want to set new Priorities!

We need  to correct the current deficit in parking infrastructure!

We need to be able to meet the current needs as well as future needs.

We need to make better use of existing infrastructure, before we justify further expenditure or rate increases.

Help me make the people of Penrith the priority.

The Major Parties have had years to get it right, yet we have an absolute mess, we have the worst parking and congestion, They’ve inflicted special rate variation increases and have run down local sporting facilities.

All we ever hear from them are empty promises!

On the 12th May, hold them accountable for all the years of bad planning which has resulted in the current mess.

Seriously, we need a new focus, we have to reshape Council and make people the priority.

Below are the questions I asked in my submission:

We need to know how will the community be able to measure if Council has increased the level of public participation?

Plus how will feedback be provided back to all participants in the following engagement areas: 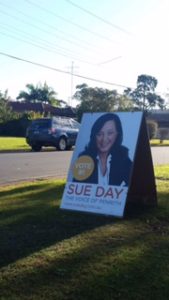 The most practical solutions that can be implemented very easily..  There needs to be commuter parking with a combination of the following options..

END_OF_DOCUMENT_TOKEN_TO_BE_REPLACED

Driveway Safety – Are your Kids at Risk?

Driveway Safety Are your kids at risk?

Shannon and Rebecca have two gorgeous children and, drive way safety is now at the forefront of their mind.

After hearing about an unfortunate accident where a fathers vehicle accidentally ran over his two year old son, Shannon admitted that this type of accident is a big fear for both of them.

END_OF_DOCUMENT_TOKEN_TO_BE_REPLACED

Let’s get Penrith Moving now. We need solutions now, not in the future.

We need the recommendations outlined in the recent Mckell Institute Two Birds One Stone report to be  implemented and Penrith be the envy of all other Cities.

END_OF_DOCUMENT_TOKEN_TO_BE_REPLACED

If Penrith Council are serious about addressing commuter car parking issues our city, they need to be creative in their strategy.

Council cannot simplistically reduce the number of all day parking bays without giving the people another option.